Note: in the initial publication of this article I made a mistake when extracting data points from the JS3 polar curve.  Thanks to Matthew Scutter for pointing this out to me.  This error has been corrected below.

The published performance data from Jonkers Sailplanes and Schempp-Hirth, suggest a very significant performance advantages of the JS3 over the Ventus 2cxT. 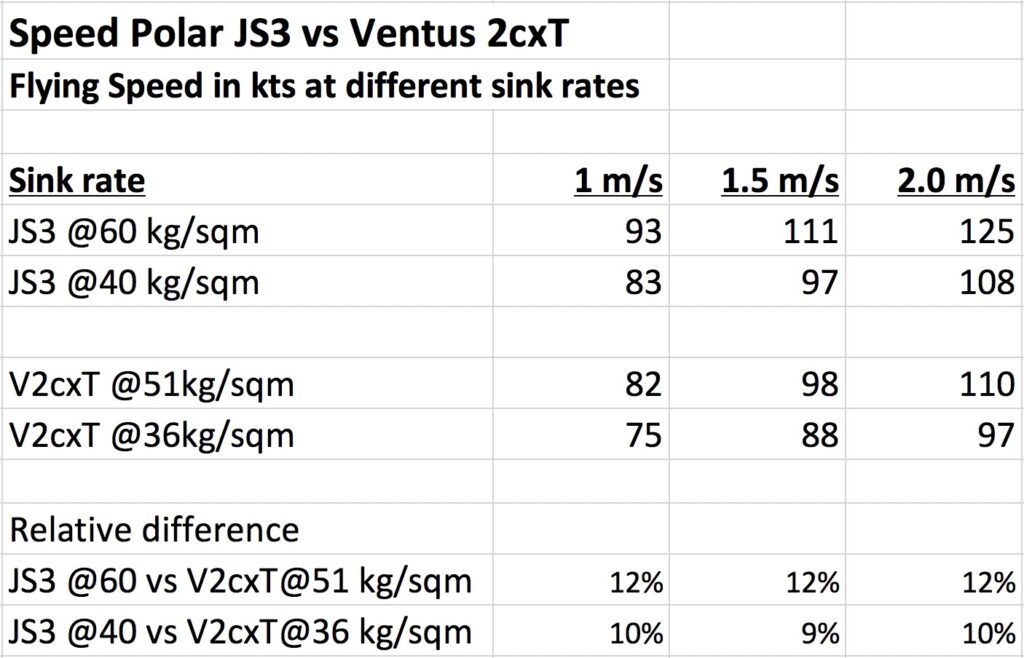 However, one complication is that ballasted (or unballasted) the wing loading for the two gliders is different.

Let’s try to create a more “apples to apples” comparison by comparing the published performance figures at equal wing loading.  To do that we have to estimate the values for the JS3 at a wing loading of 51kg/sqm and that of the Ventus 2cxT at 40kg/sqm.  (To create the estimate I assumed that the attainable speed at a given sink rate for each of the gliders increases linearly with additional wing loading.  This methodology is probably not exactly accurate but any other plausible method would yield almost identical results.) 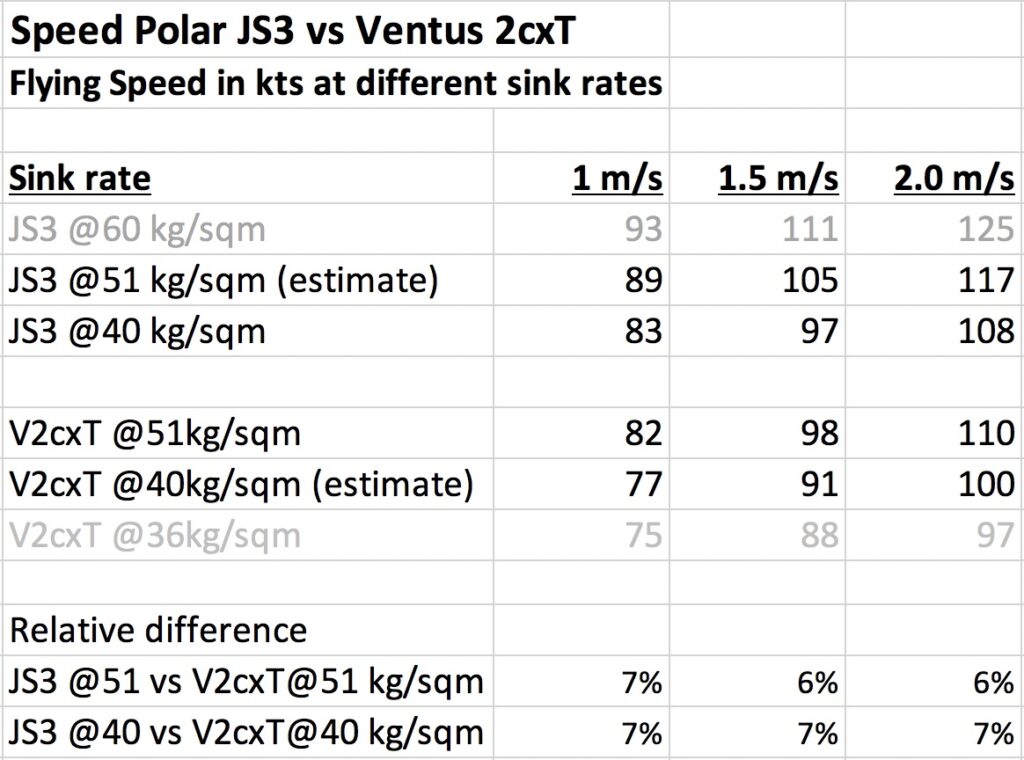 The table shows that even at equal wing loading the polar data still suggest a performance difference of 6-7% for the JS3.

Do those data points hold up in reality?

A little while ago I wrote about a Practice Race Day in Nephi on July 1.  One aspect that I did not give much attention was the difference in glider performance between John Seaborn’s JS3 and my Ventus 2cxT.  John and I flew the last 92.7 km (57.6 miles) within just three minutes of each other, which makes the results directly comparable.

I took a closer look at our flight traces to see how well my Ventus 2cxT held up against John’s JS3.  As a multiple National Champion John is unquestionably the better pilot, so we should expect John’s final glide to be at least 6-7% faster than mine if the published glider performance data are true AND if we flew with identical wing loading. (Both of us flew with 18 meter configurations.)

I was flying with approx. 80 liter of water ballast that day, which means my wing loading was right around 10 lbs/sqft (49 kg/sqm), very close to the 51 kg/sqm that Schempp-Hirth uses for their published polar curve.

I do not know how much ballast John had on board (although I do know that he flew with water that day) but I think it is likely that his JS3 was at or close to maximum gross weight, which would mean a wing loading of more than 12 lbs/sqft (close to 60 kg/sqm).  At full wingloading his JS3 should be about 12% faster than my Ventus.

What makes this flight so comparable is that we reached this location not only within 3 minutes of one another but also almost exactly at the same altitude.  In fact, I was at 16,428 ft MSL and John was at 16,508 ft, i.e., only 82 feet higher.

We’re still neck to neck although John took a slightly more easterly line.  John also flew a little faster than me during his cruise, thereby losing more altitude, and decided to make two extra circles in good lift (where he gained 700 feet of altitude).  At 16:19:41 he was 270 degrees into his first circle.  My altitude was 16,672 and John’s was 16,494.  I.e., I was now 178 ft higher than John.

Let’s wind the clock forward another five minutes, i.e. 10 minutes into the glide):

There is still hardly any visible difference in terms of our location.  Since the prior position I had taken one pointless turn which netted absolutely no change in altitude.  John’s 700 ft altitude gain in his two circles is now reflected in a positive altitude difference between our gliders of 675 ft: I am at 15,639 ft and John is at 16,314 ft.

Purists may say that the true final glide only starts here since neither of us stopped to climb from this position until the finish.

Let’s jump ahead another five minutes. We’re now 15 minutes into the glide: 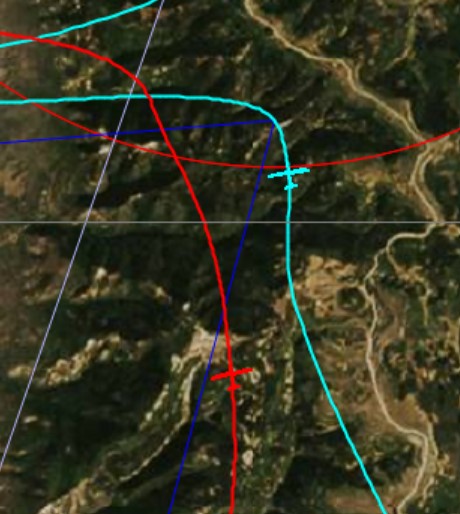 John took advantage of his positive altitude difference and flew significantly faster than I did.  He is now almost exactly 2 miles (3.2 km) ahead of me and about to enter the final turn point.  At our flying speeds this means that John is now almost exactly one minute ahead.  However, John’s higher speed came at the price of 1000 ft of additional altitude lost over the past five minutes: while he was previously 675 higher, he is now 371 ft lower.  I’m now at 14,697 and John is at 14,326.

Once, again, let’s jump another five minutes ahead.  We’re now 20 minutes into the glide:

John is still approx. 2 miles ahead.  I have put the nose down with the finish in sight and am more rapidly losing altitude.  At such very high speeds there is a steep price to pay for flying with less than maximum wing loading.  I am now at 12,010 feet and John is now almost 300 feet higher at 12,308 ft.

There is still just over five minutes to go, so let’s jump to the last checkpoint before the finish.  We’re now 25 minutes into the glide: 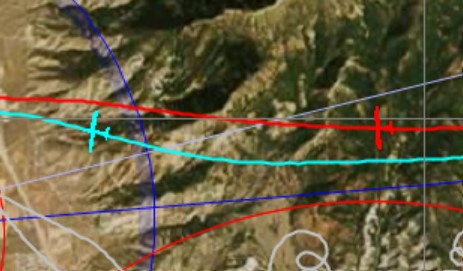 It’s now obvious that John is clearly ahead and I can’t do anything to catch up.  Let’s look at the finish line: 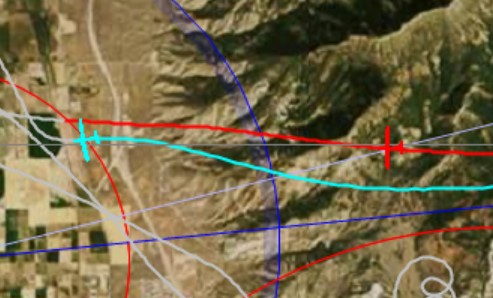 5.1% is quite significant but it is clearly less than the published polar curves suggest, especially if John flew close to maximum wing loading.

In addition we can see that John also lost 532 ft more altitude than I did during the final glide (John lost 7287 ft whereas I lost 6755 ft).

However, such an argument – while mathematically correct – would miss the point that flying faster at a speed that would have resulted in an additional loss of 532 feet would not have allowed me to reduce my finishing time difference from 1:19 minutes to just 14 seconds.  The reason is that the speed polar drops off quite steeply at such high speeds.  A better way to save time would have been for me to just not do that one pointless exploratory turn.  This one turn cost me 50 seconds and netted no altitude gain at all.  Omitting this turn alone would have reduced my finishing gap from 1:19 to 29 seconds.

In summary I can say that my Ventus 2cxT held up quite well against John’s JS3.  In other words, it confirms that John’s superior performance over the entire flight has much more to do with pilot skill (e.g. during John’s only turn during the glide he gained 700 feet in 70 seconds compared to my 0 ft gain in 50 seconds) than with any performance advantage that his JS3 may have over my Ventus 2cxT.  This also is confirmed by my prior analysis of all other aspects of this flight.

Clearly, this analysis is just based on one flight and not under “laboratory” conditions.  It is not scientifically valid because not all variables were “held equal.” We did fly three minutes apart and it is possible (tough doubtful) that the conditions were more favorable three minutes earlier.  We also took a slightly different line above the Wasatch Plateau and I might have gotten lucky.  But I doubt it.  I’m fairly confident that the performance difference between the two gliders is exaggerated. If anyone wants to do the performance analysis for themselves, the flight traces can be found here:  John Seaborn’s trace and Clemens Ceipek’s trace.