Boulder is an outstanding place to soar.   But it is also quite technical and the technicalities start at launch.   At many soaring sites a pattern tow to 1000-2000 ft AGL is normally sufficient to climb away.  Sometimes Boulder can be this way, too.  But only sometimes.  More often than not, launching from Boulder can be a real challenge.  Once you’re up under the clouds, the soaring is breathtaking.  Until you’re up, it can be breathtaking too, but for different reasons.

This article is all about launching from Boulder so you can really enjoy the soaring and go places:  Where should I tow to?  Where will I find lift? How high should I release?  This article is meant to help anyone who is new to soaring in Boulder and has these fundamental questions.  I know I did when I started out.

In April of 2021 I gave a presentation specifically about this subject.  Here’s a recording of it from the SSB YouTube Channel:

You can also download a .pdf file with all the presentation materials.  It’s a bigger file so it may take a little time to download.

What Do Other Pilots Do?

To address these questions I examined 51 cross-country flights from Boulder that were uploaded  to OLC in April, May, and June of 2019.  (I generally looked at flights with a minimum distance of 250 km to ensure that I captured days with reasonable soaring weather.  Also, I wanted to focus on thermal conditions and therefore excluded flights that were obviously flown in wave.  Only flights that started via aerotow are included, i.e., the chart does not include flights with self-launching gliders).

If you want to zoom in and look at the chart in detail in Google Earth, you can do so here. All flights are downloaded from OLC.  I.e., you can look up any particular flight and examine the flight paths taken.

Location of the first good lift:

The following chart provides a similar set of data from the same time period.  This time, we are looking at flights of CX, Boulder’s most prolific cross-country pilot.  CX is a self-launcher and instead of the release points, the blue dots indicate the location where the pilot turned off the engine.  In some ways this is even more insightful than the data from aerotowing because the pilot of a self launcher has obviously the most immediate control over the direction of the flight path between takeoff and “release”.

To view the file in more detail in Google Earth, click here.

Some of the same points observed earlier are now amplified even more:

After all this analysis, let’s come back to the three questions:

It obviously depends on the weather.  Each day is different.  However, unless there are strong clues in the sky that suggest otherwise, the following is worth considering:

How Do I Work My Way Up?

We all want to climb quickly so we can “connect” with the clouds.  Once we’re up there things are easy.  But getting there can be a major challenge.  (And on some days it is simply impossible.)  But you can work to improve your odds. This section is about improving your odds, especially on difficult days.

The following chart shows the locations where pilots have found lift from low altitudes.  Each dot represents the starting point of a climb that started an an altitude at or below 1500 feet AGL.  (Obviously the  altitude MSL varies based on the terrain.) The pilot’s contest ID or initials are shown as well.  The source data are all flights originating from Boulder that were uploaded to OLC in 2018 and 2019.

You can readily see that the lift is indeed where you would expect it: the vast majority of all climbs originated from one of the main (south or south-east facing) ridge lines marked in yellow.  You can click here to see the chart in Google Earth.  This will allow you to zoom in and look at the details. 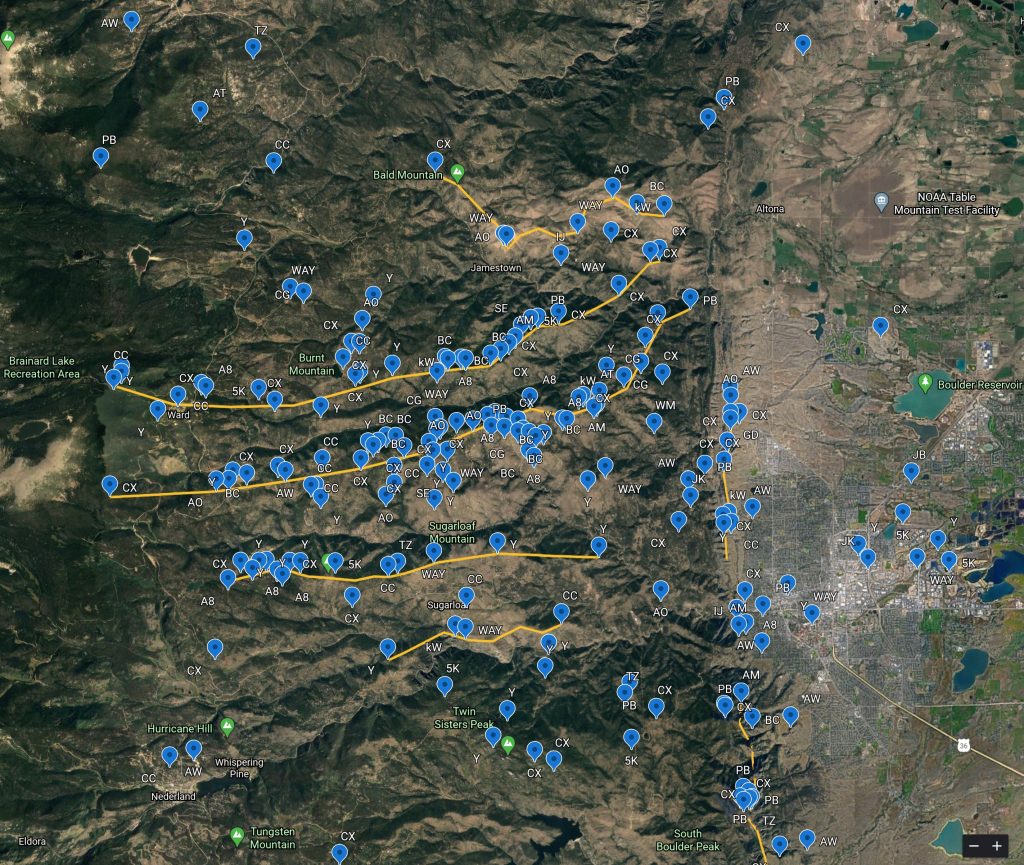 Now, it’s important to note that not all of these climbs were “good climbs”.  In fact, the vast majority were quite weak and soon topped out.  When pilots are forced to seek climbs from such low altitudes it usually is an indication of a convergence day – i.e. they must get further west before they will find stronger lift that will reach higher.

So what’s my strategy when faced with a difficult day?

As I explained before, the lift tends to get better as I push further west.  This is particularly true on convergence days where the only good climbs are west of the convergence line. How can I get there? If there’s no lift over the lower foothills at all, I may have to take a really high tow.  (Here’s one such case where this was indeed the only option.)  However, most often there is at least some lift over the hills, and in this case a practical way is to take a series of small, mediocre climbs, “milk them” as high as they will go to build up altitude in excess of the safety margin, then “invest” that altitude by progressively pushing further west until I find “a good one” that allows me to connect with the clouds.

Finally, here are some important tips to stay safe:

I hope this has been helpful.  Have fun, and above all, fly safe!