Just like thermals, wave lift can be invisible (on blue days) or marked by clouds.  The presence and extent of clouds depends on the temperature profile and the moisture content of the air at various altitudes.  The following types of clouds are characteristic for wave: 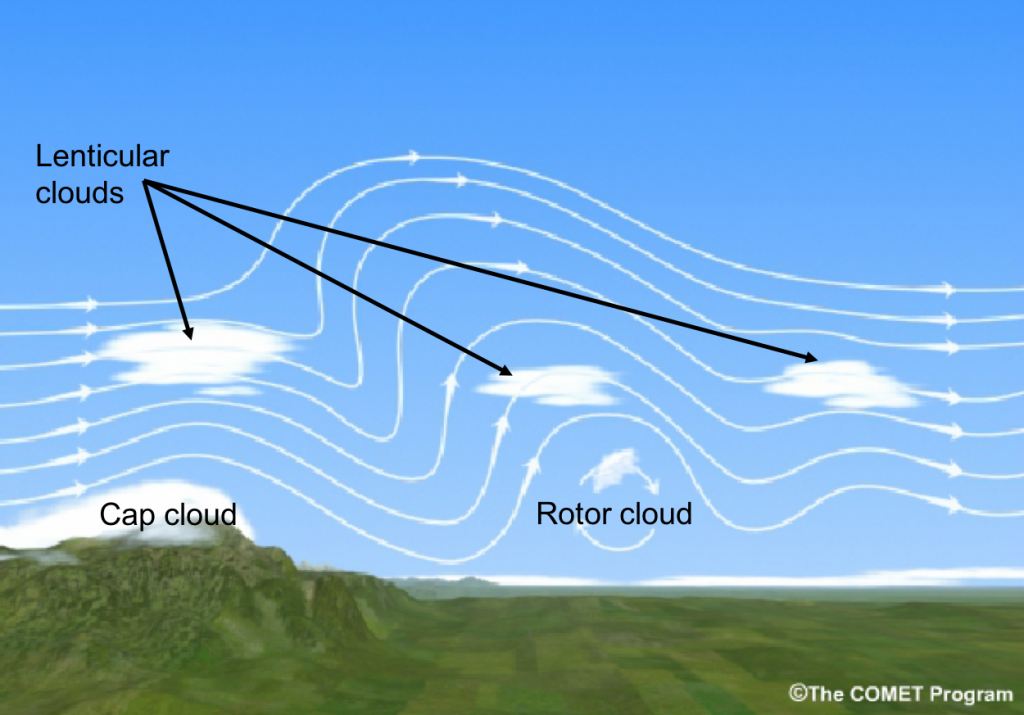 Also called “Föhn Wall”, cap clouds form on the upwind side of the wave trigger where moist air cools as it is pushed up along the slope. This is often accompanied by intense rain-fall on the luv side of the mountain.

On the lee side, the air is forced back down again by the wind blowing over the mountain range.  The clouds dissolve as the air warms up as it flows down the slope.

“Lennies”, as lenticular clouds are often affectionately called, form at higher altitudes where air ascends in the wave flow on the lee side of the mountain.  These clouds are more or less stationary above the ground (“standing waves”) even though the wind is blowing through them, often at very high speeds.  The leading edge appears where the ascending air reaches the dew point as it cools off.  After the airflow has peaked the air begins to warm again on its subsequent descent and the lennie dissolves.

Lenticulars often consist of “super cooled” water droplets even if the air is well below 0 degrees Celsius.  The droplets can remain liquid below freezing unless there are some dust particles or other solid matter that they could freeze upon (such as the canopy or wing of a glider).

Depending on the moisture content of the airflow, lennies can have multiple layers with clear air inbetween.

Sometimes ice clouds will form at the very top of a wave system.  They consist of ice crystals and tend to spread out over a wider area, sometimes starting slightly upwind of the trigger range and spanning across the entire wave train.

The wave flow at this altitude is usually quite gentle and the ice crystals will only sublimate very slowly as the air continues to flow downwind of the trigger.

Rotor Clouds, also called Roll Clouds or Rotor Cumuli, form downwind of the trigger in the lee of the mountain.  They are often approx. at the same altitude as the cap cloud and directly below a lenticular.

Rotor clouds can look like small, harmless cumuli that just happen to be located downwind of and parallel to the trigger slope.  At other times, rotor clouds can appear as a massive cloud street.  In either case it is sometimes possible to see the rotation of the cloud.

Like lenticular clouds, rotor clouds tend to be stationary above the ground.  The cloud forms due to updrafts on its leading edge and it dissolves due to downdrafts on its trailing edge. The air underneath and within the rotor cloud is usually very turbulent, whereas the airflow in the wave just above the rotor tends to be smooth and laminar.

Putting It All Together

Rotor clouds are often referred to as “rotor cumulus” (e.g. by G Dale in “The Soaring Engine”) but I find that term misleading.  Unlike cumuli, which are formed by convection (i.e., rising columns of warm air), rotor clouds are orographic clouds, i.e., they are formed by air that is forced up by the wind. 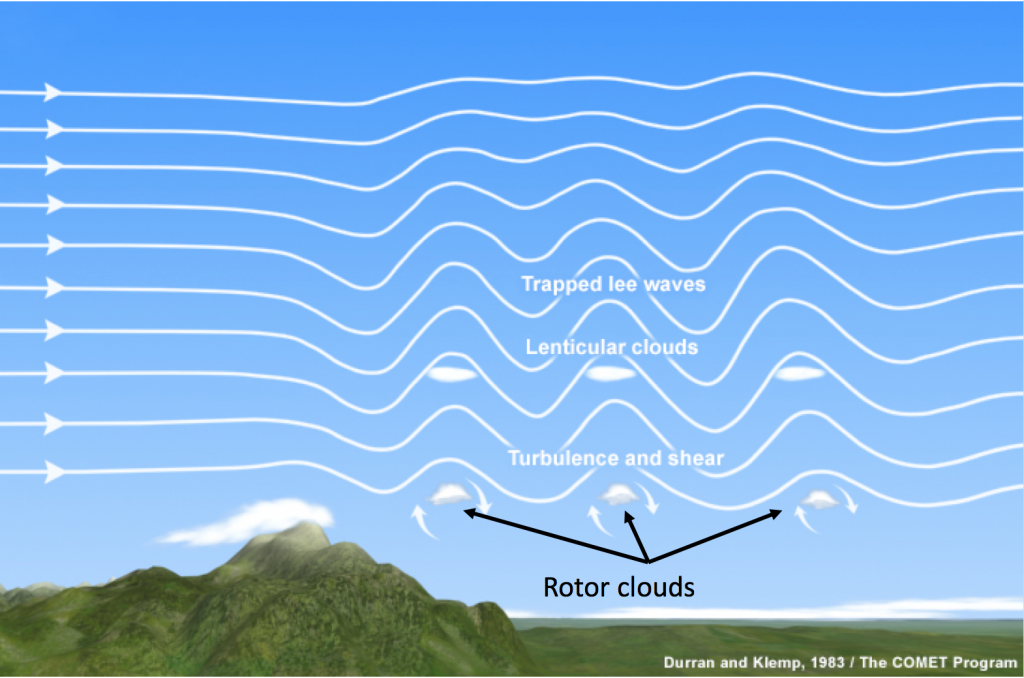 If there are no lenticular clouds (and if you neglected/forgot to check for wave conditions) it may not be immediately obvious whether a particular cloud is a rotor cloud or a regular cumulus that originates from convection.

Consider the clouds in the two pictures below.  Are these rotor clouds or convective cumulus clouds?

If you just look at the clouds in isolation the differences are subtle at best. It becomes much easier if you consider the clouds in the context of their environment.

Clouds are likely to be rotor clouds if …

… it it is windy and they don’t drift with the wind.  Rotor clouds tend to remain stationary above the ground even in very strong winds because they constantly form on the upwind side and dissolve on the downwind side.  In this sense they are similar to lenticular clouds. Cumuli will drift away with the wind.

… the clouds have a ragged appearance and don’t billow at the top in the same way as convective cumuli tend to do as they grow.

… you can see the clouds forming upwind and dissolving downwind. You may also be able to see the rotation. Convective cumuli grow from below as they are fed by one or more thermals from the ground.

… the conditions are not conducive for convection.  Rotor clouds can appear at all times during the day (or night), independent of sunshine warming the ground whereas cumulus clouds depend on warm air rising above heated terrain.

… there are other clear signs of mountain wave. E.g., clouds that form below lenticular clouds are likely rotor clouds. Also, rotor clouds can only form if there are significant winds aloft.  If you know that there isn’t much wind at altitude it is quite unlikely that you will see any rotor clouds.

The best way to correctly identify these clouds is to observe their development by repeatedly looking at the same cloud during a period of several minutes. Has it drifted with the wind, or did it remain stationary above the ground? Can you see it form and dissolve? Can you see the rotation in the cloud?

This is in contrast to thermal cloud streets that form parallel to the direction of the wind.

The Föhn Gap is a usually persistent gap in the cloud layer on the lee side of the mountain.  It forms because the air warms rapidly (at the dry adiabatic lapse rate of 3 degrees C per 1000 feet) as it is pushed down along the lee slope. Warm air can hold more moisture and hence the cloud evaporates.  New clouds (lenticular clouds and/or rotor clouds) can develop further downwind where the rising air cools and once again becomes saturated with moisture.  Typically there will be additional gaps in the cloud layer in each wave trough. However, only the cloud-free zone between the gap cloud (which sits atop the trigger range) and the first wave clouds is called the Föhn Gap.