What is Wave Lift?

Every soaring textbook explains that under certain conditions wave lift forms on the lee side of a mountain range when the wind blows right across it. Usually this is illustrated with a graphic like this: 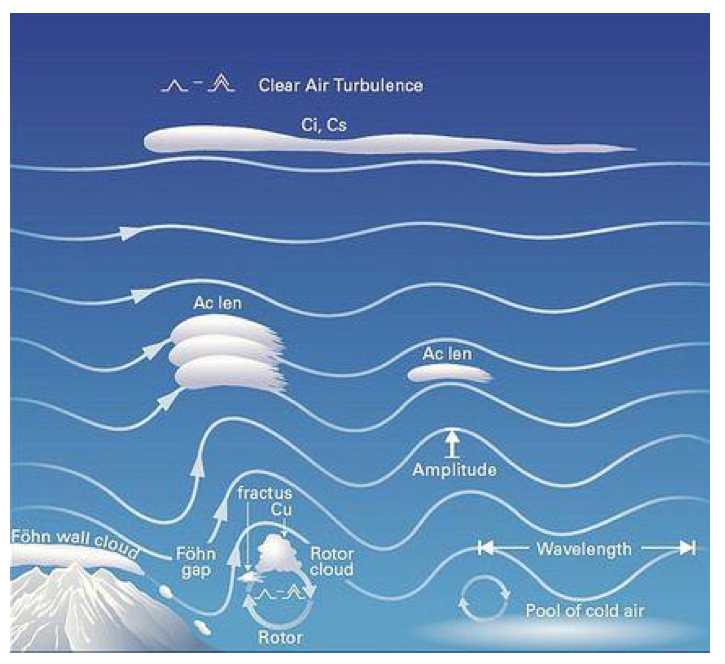 The picture shows the air oscillating (i.e., repeatedly moving up and down) right behind the mountain range until the air flow returns to equilibrium.

It is fairly intuitive to understand that air blowing down a steep mountainside eventually has to rise again. However, it is less intuitive, why the upwards movement is so pronounced (after all, air moving up behind a mountain range can reach altitudes that are several times higher that the mountain range itself). And it is also not intuitive, why the airflow continues to oscillate such that there is a secondary wave, a tertiary wave, and so forth. Many articles on the subject don’t really explain why the air continues to move up and down, i.e., how these oscillations come about. In addition, I remember asking myself a lot of other questions pertaining to wave lift.  So I decided to sift through various text books and try to answer each of the following questions here for myself.

So why does the air move up and down? 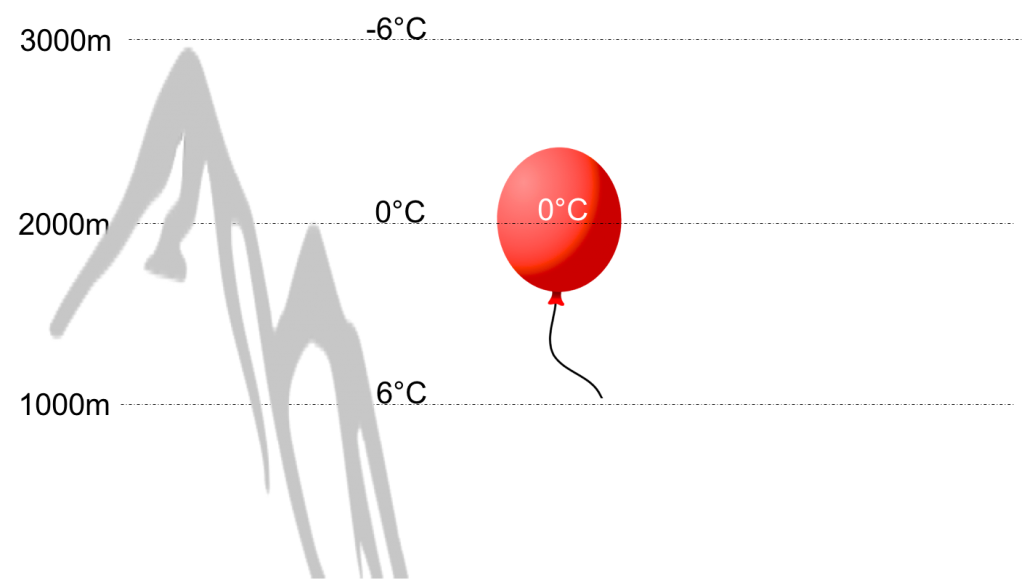 Next you carry the filled and sealed ballon down to an altitude of 1000m.  Here comes the key question: what temperature has the air inside the balloon that you have just brought down to 1000m?

So there we have it: we are now at 1000m and the air in our balloon has 10 degrees C while the surrounding air temperature is still 6 degrees C. 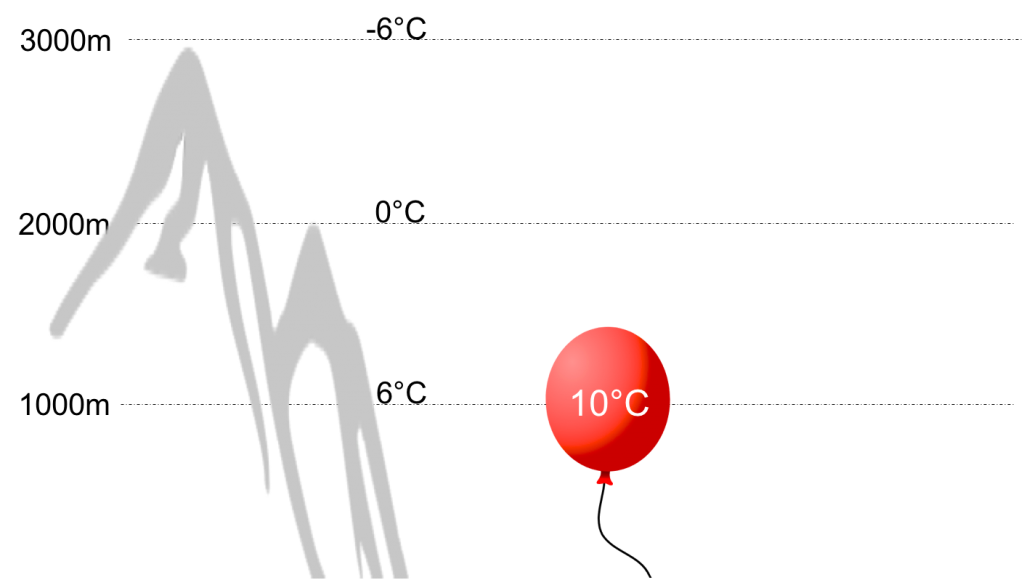 Imagine we now let go of our balloon (assume that the skin is not only infinitely expandable but also weightless). What will the balloon do? Well, now things are becoming more intuitive.  The air inside the balloon is much warmer (and lighter) than the ambient air at 1000m. Hence, the balloon will immediately start to rise.

As it rises the air inside it will cool again at the same dry adiabatic lapse rate. I.e., when the balloon is back at 2000m the air inside will once again be zero degrees Celsius, the same temperature as the air surrounding it. However, our balloon won’t suddenly stop rising. It has gained a lot of momentum on its way up from 1000m and its inertia will force it to overshoot and continue to climb. 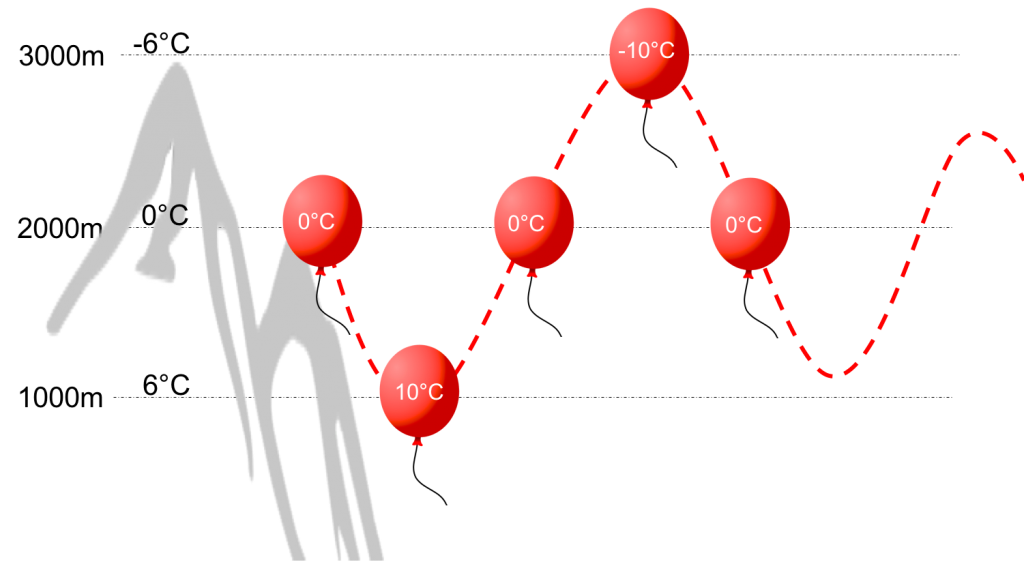 Our example with the balloon has made it clear that temperature differences between a displaced airmass (inside the balloon) and the surrounding air are causing these oscillations. Thereby it also illustrated one very important conditions for wave to occur: the ambient air must be “stable” for those oscillations to be possible. In other words: the Environmental Lapse Rate (ELR) must be smaller than the DALR.

If the ELR were bigger than the DALR, i.e. the surrounding air was unstable, than the balloon’s vertical momentum would accelerate in whatever direction it was initially displaced.

So we remember that one critical precondition for wave oscillations is a stable surrounding air mass characterized by an the environmental lapse rate that is smaller than the dry adiabatic lapse rate: i.e.: ELR < DALR.

In our balloon example, the wave oscillations were triggered when our hiker took the balloon filled with 0 degree air at 2000m and displaced it by carrying it down to 1000m.

So, in order to trigger wave, we need a force that causes stable air (i.e., air that naturally resists moving up or down because its ELR is less than the DALR) to be displaced from its original altitude.

Obviously the air is not enclosed by a balloon but in sufficiently strong winds the rapid downward movement along a mountain slope does not allow for a mixing of the displaced air with the surrounding air mass.

So we remember that for mountain wave conditions to arise, strong winds have to blow across a mountain range and displace a stable air mass along the downward slope in the lee of the mountain.

The displaced air will then begin to rise rapidly.  As long as it is warmer than the surrounding air, it will gain momentum.  As it rises, it will cool at the DALR, and, because of inertia, it will overshoot the point where it reaches the same temperature as the ambient air.  Eventually its ascent will come to a halt.  But at that point the ambient air will be warmer than the parcel that just moved up and hence it will begin to move down again.  The parcel will continue to move up and down, each time overshooting the equilibrium point due to its upward or downward momentum.  Further downstream of the mountain the oscillations will continue to dampen until the temperature equilibrium with the surrounding air is reached and the oscillation stops.

What is a Wave’s Amplitude and What is its Wavelength?

Waves can be characterized by their amplitude and wavelength. Both characteristics are important for soaring.

The amplitude is the height of the wave measured from its midpoint (where the upward moving air has the same temperature as the surrounding air mass) to the top of the wave (where the upward moving air tops out and begins to move down because it is now colder – and therefore heavier – than the surrounding air). The amplitude of a particular wave depends on the topography (the height and shape of the downward mountain slope), and also on the strength of the wind (the stronger the wind the greater the amplitude) and the stability profile of the air (the more stable the air, the greater the amplitude).

The wavelength is the (horizontal) distance between the top of the wave crest and the top of the adjacent wave crest.  The wavelength mainly depends on the stability profile of the air and the strength of the wind: the stronger the wind, the longer the wave length (the air travels farther from crest to crest if the wind is strong). Likewise, the weaker the stability profile (at a given wind speed), the longer the wave length will be (because in less stable air the temperature gap between the displaced air and the surrounding air will be less, therefore the impetus of the displaced air to quickly return to the equilibrium will be less). Mountain waves tend to have a wavelength anywhere between 3 and 30 kilometers.

The strongest lift for soaring will occur when the wave length is short and the amplitude is very high.  Relatively strong winds moving a very stable air mass directly across a high mountain range along a steep downward slope will generate such strong conditions.

Read Next: How is mountain wave triggered?