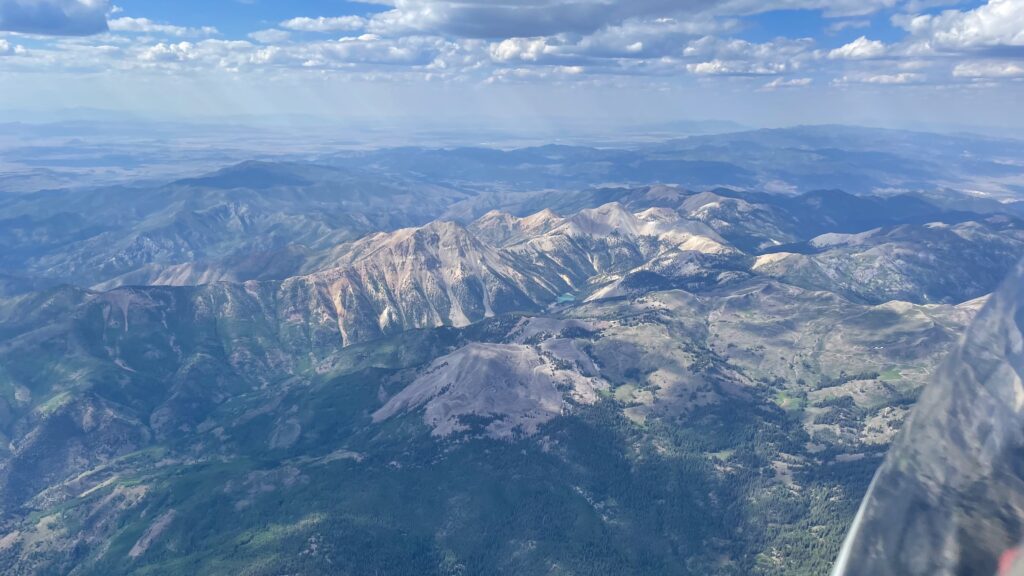 Today, Day 7 of the 18m Nationals, was unbelievably fast. The task was once again an Assigned FAI Racing Task with with small 500m turn cylinders at Browns Peak, Bryce Woodlands, and Burnt Peak – then back to Nephi. Task distance 568 km.
At launch time, much of the start area was in shade and we were down to four tow planes, which led to a late start gate opening. I was worried that it would once again be a race against the end of the day and was determined to get going as soon as possible.
Fortunately the cloud cover moved east, and at 14:33 the gate opened, and everyone had to descend below 12,000 feet. Since we fly based on FAI rules we can then climb up to 17,500 feet before crossing the start line and going on course. Cloud bases were considerably higher than that so everyone had to watch their altimeters to avoid airspace penalties.
I found a good climb a bit removed from the mad hustle near the gate and was up above 17,000 within minutes and at 14:45 I was on my way.
The conditions out on course were exceptionally strong. We had good cumulus clouds throughout the entire task area, there was only minimal overdevelopment near the second turnpoint, winds were generally light, and thermal strength often exceeded 10 kts. Cloud depth was fairly modest which meant no risk of thunderstorms. Not even virga. Thermally induced convergence lines formed above the spine of practically all mountain ranges.
If you could design perfect weather conditions for soaring, you would be hard pressed to make any improvements over what we were handed today.
When conditions are this good, the focus must be on pushing forward at all times. Selecting the best lift lines along the clouds and stopping only for the strongest of thermals is what makes the winners stand out at the end of the day. Equipment is also important, especially glide performance at very high speeds. I found myself flying with A8, John Seaborn, on the first leg but my attempt to keep up with him quickly became futile when his dot disappeared in the distance on my Flarm screen not long after the first turnpoint.
There were some decisions to make as to which cloud street would provide the better line but the streets were all fairly well aligned with the task. It was a bit akin to deciding which interstate highway to pick when Google predicts similar arrival times for each option. I payed attention to the shapes of the clouds as well as to the shape of the terrain and the wind and the decisions came relatively easy. But the alternatives might have worked just as well in many cases.
I reached the southern-most turnpoint at 4:45PM with 250 km to go to the finish. After yesterday’s experience with the power switch (someone seemed to have turned off all lift at exactly 6pm) I was a bit worried about a repeat occurrence. I had had a good run south but I needed an equally good run north if I wanted to be on final glide by 6pm.
Fortunately we did not see much if any weakening of the conditions for the next hour. I got some good climbs south and north of the Tushar Mountains and then picked a line of still newly building clouds over the Pavani Range where I found a 9 knot climb at 5:50pm which took me to Final Glide altitude.
From there I flew all out at 130 kts toward the finish line. There was still strong lift even over the valley. Very different from yesterday. I attribute the difference mainly to the wind direction. Today we had south-westerly winds and temperatures on the ground were exceptionally hot at 103 degrees Fahrenheit. (Yesterday the northerly wind from Utah Lake brought early cooling and shut down all thermal activity.)
I finished with an average speed of 105 mph (170 kph). I was quite proud of myself until I found out that it was still only good for 24th place. John Seaborn won the day with a blistering performance at 118 mph (190 kph!). Almost the entire field flew faster than 100 mph today. There may have been equally fast soaring races before but I am not aware of any where such speeds have been achieved by so many. These were truly outstanding conditions.
Sean Fidler was 4th today and still leads overall with Andy Blackburn in 2nd (today 3rd), and John Seaborn in 3rd. Tomorrow is the last contest day and the top 5 pilots are within 200 points from one another.
My flight trace on WeGlide: https://www.weglide.org/flight/81886
Flight trace on OLC: https://www.onlinecontest.org/…/gliding/flightinfo.html…
Contest Results: https://members.ssa.org/ContestResults.asp?contestId=2486&ContestDetailId=24454&ContestName=2021+18%2DMeter+Nationals+at+Nephi&ContestDate=7/7/2021&ResultsUpdate=True

One Reply to “Insanely Fast: 105 miles per hour was good for what place?”