A few weeks ago I had a scary situation when towing fully ballasted behind a Piper Pawnee.  I had my camera running and published a short instructional video about the incident. I hope that it helps others avoid similar situations in the future.  Here is the video:

The comments indicate that these incidents are relatively common and occur most frequently when the tow pilot is used to pulling very light gliders that only require a low tow speed. A clear and deliberate briefing of the tow pilot before the flight is essential. You can also find a similar incident in one of Bruno Vassel’s videos.

Moreover, Dave Nadler gave a safety briefing on this very topic a few years ago at a US Soaring contest.  In it he explains that the glider’s stall speed on tow is actually higher than it is in free flight.  And why the problem is exacerbated behind short-winged tow planes such as Pawnees.  Please take a few minutes to also watch Dave’s video.  You can find it here.

A few good questions came up in this context, which I would like to address here.

Why did you not release immediately?  Would you release if a similar situation were to happen again?

I’ve spent a lot of time thinking about this question.  At the moment I was too afraid that the glider might stall and drop hard to the ground if I pulled the release.

However, perhaps the safest response for everyone involved would have been the following:

This plan only works if there is enough runway left for landing straight ahead. In Boulder we definitely have enough space available.

My main concern with this strategy is whether staying in ground effect until the low tow position is reached could be pulling the tow plane’s tail down to the point where it becomes difficult for the tow plane to get its nose down and pick up speed.  However, considering that low tow is a normal tow position in some countries, I assume it should not be a problem, at least unless the tow plane itself is close to stall speed.

If you have additional thoughts on this subject, please add them in the comments below. I am especially interested to hear from glider pilots who normally fly in low tow position.

PS: Dave Nadler’s explanation is very compelling and illustrates that a glider’s stall speed is actually higher on tow than it is in free flight.  This gives me more confidence to release immediately in the future because releasing is unlikely to lead to an immediate stall because the stall speed comes back down.  So my plan is to release, release stick pressure while simultaneously moving the flaps into landing configuration, then land straight ahead with the spoilers closed (and only open them as soon as the glider is on the ground.)

Maybe.  The thing with urgent communications is that the best one to use is the one that is instantly understood.  I readily admit that “Faster!” is not precise and may sound unprofessional but I think it conveyed a sense of urgency that “Up 20” may not have.  I am also not certain that the tow pilot would have instantly understood and responded to “Up 20”.  The lesson here, at least in my mind, is that tow pilot and glider pilot should make communications part of the briefing so both parties are in synch on what language to use.  I’m curious what you think the best protocol should be when you need an instant reaction.

The communication should have included the call sign of the tow plane.

Yes.  In principle this is certainly true.  A clear and non-ambiguous communication would be something like “X-Ray Yankee Zulu, 10 more knots.” (And then ask for another 5-10 knots if necessary.)  However, in the stress of the situation I did not remember the call sign even though I had said it myself only two minutes earlier.  (We have 5 different tow planes at the field.  I’ll definitely try to remember it better the next time.)

Also, if you watch the video you’ll notice that I had to communicate in a fraction of a second while also considering all the other choices such as whether or not to release.  What mattered more than anything was a prompt ]reaction by the tow pilot. (Basically to level off or push the nose down and pick up speed).  Just saying the abbreviated three digit call sign takes an entire second and saying “X-Ray Yankee Zulu, 10 more knots” would have taken about two seconds which I didn’t really think I had.

What will you do differently going forward?

The main thing is to adjust my briefing to avoid such situations in the first place.  I don’t always know what the air speed units are in the specific tow plane ahead of me.  Therefore, I am now requesting a minimum tow speed in knots AND MPH.  E.g., I’m now saying “Towplane XYZ, behind you is glider Victor One, Fully Ballasted, Minimum Tow Speed 70 knots or 80 MPH.”

You can find a collection of my favorite soaring safety articles on this page. 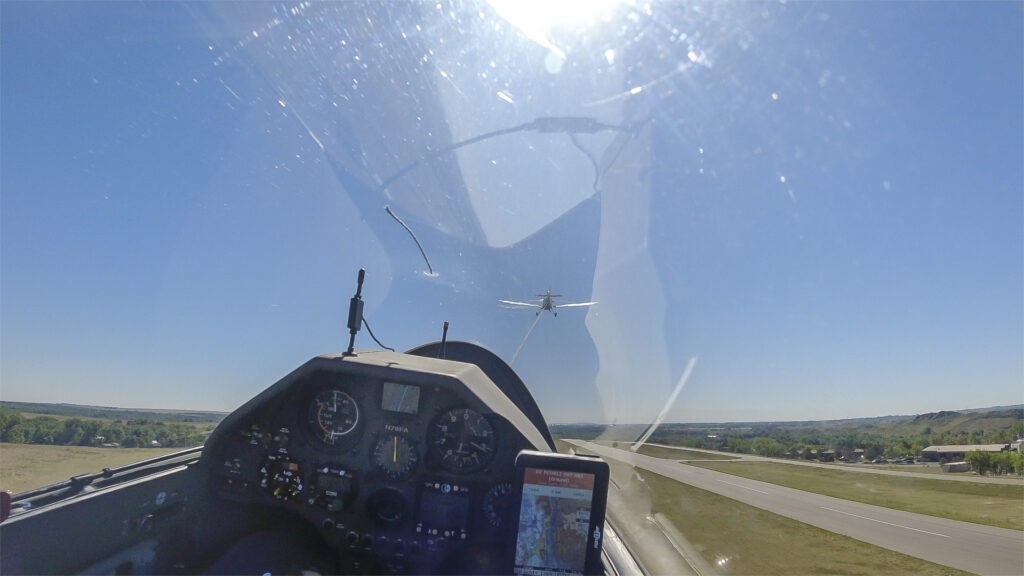