We had a fun first SSB Condor flight last night.  Turnout was better than I had expected! 11 pilots participated and I know several more were interested but either didn’t get ready in time or had other issues to deal with.  I hope to see even more join next week!

Thank you to everyone who participated!  Congratulations to Scott Snyder, Richard Hall, Colin Barry, Dylan Buli, and Charlie Gillespie for making it around the task.  Steve Kemper did as well but just failed to get a valid start so his name does not appear on the official score sheet.  Armand Charbonneau finished the task offline afterwards. Bill Kaewert had a good start but a technical issue prevented him from completing.  Well done everyone! Special congratulations to Scott Snyder who finished the task in a Standard Cirrus without using any miracles (no thermal helpers, no plane recoveries) in the very respectable time of 32 minutes and 13 seconds.  That’s an average task speed of 118 kph!
(For those who care, the finishing times for those who officially completed the course are attached. These are the raw times not handicapped and exclude penalties.  I have to figure out how to do handicapped scoring for the future.)
For several pilots it was their first Condor flight.  Here are a few tips based on what I noticed during the flight:
If you want to practice based on yesterday’s task, here are some tips for that:
Next Thursday at 5:30PM (same time) we will do our first flight in Boulder.  I will try to set something up that is similar in terms of level of difficulty.  Go here for instructions for installing the Boulder scenery.  Let me know if you run into issues, I’m happy to help.
Results (based on raw times, no penalties, no handicaps) 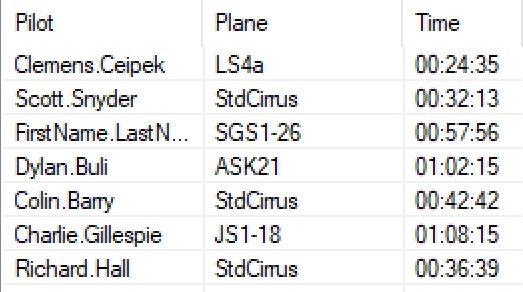 If you want to practice this flight, you can download the flight plan here.