Here are the results of our second flight.

Very close result for 2nd Place:  congrats to Armand Charbonneau and Scott Snyder who were separated by a mere 13 points.  Both pilots were flying 15 m gliders and Armand’s Ventus 3 was just 1.2 kph faster than Scott’s Diana 2.

Stephen Kapner and Gregg Davis got a little too low in the mountains and had to use a Q (200 point penalty) to make it to the finish.  When flying in high mountains it is often best to stay high because recovering from down low can be difficult.

I was flying the ridges after turning the last of the 14ers but noticed that the wind was a little too much from the south for the ridge along the Mosquito Range to work well.  Also, these mountains aren’t as steep as many places in the Alps.  I still made it across the mountains and was able to get a high speed but it was a little less comfortable than I had imagined.

I decided to use “Sailplane Grand Prix” rules to score the overall 14er Safari Cup.  I.e., the winner of each race will receive 10 points, the runner up will receive 8 points, the third placed gets 7 points, the 4th place 6 points, and so forth.

Also, as the task setter, I decided to treat my own results as “ex officio” and exclude them from the overall standings for the Virtual 14er Safari Cup.

So with that in mind, here are the overall results after the 2nd flight:

Our third flight will take us into the Sangre de Cristo mountains.  We will take off (airborne) in Buena Vista and head south.

We have eight 14ers to turn:

Little Bear Peak will be the southernmost point of our tour across Colorado.

In reality, there is one more 14er further south: Culebra Peak, which is another 35 miles further south-south-east, only 9 miles north of the border to New Mexico, and is beyond the boundaries of our Condor scenery.

From Little Bear Peak we will head north-north-east and finish at Silver West airfield. Silver West is at the bottom of the valley to the east of the Sangre de Cristos. Total task distance is 199 km. 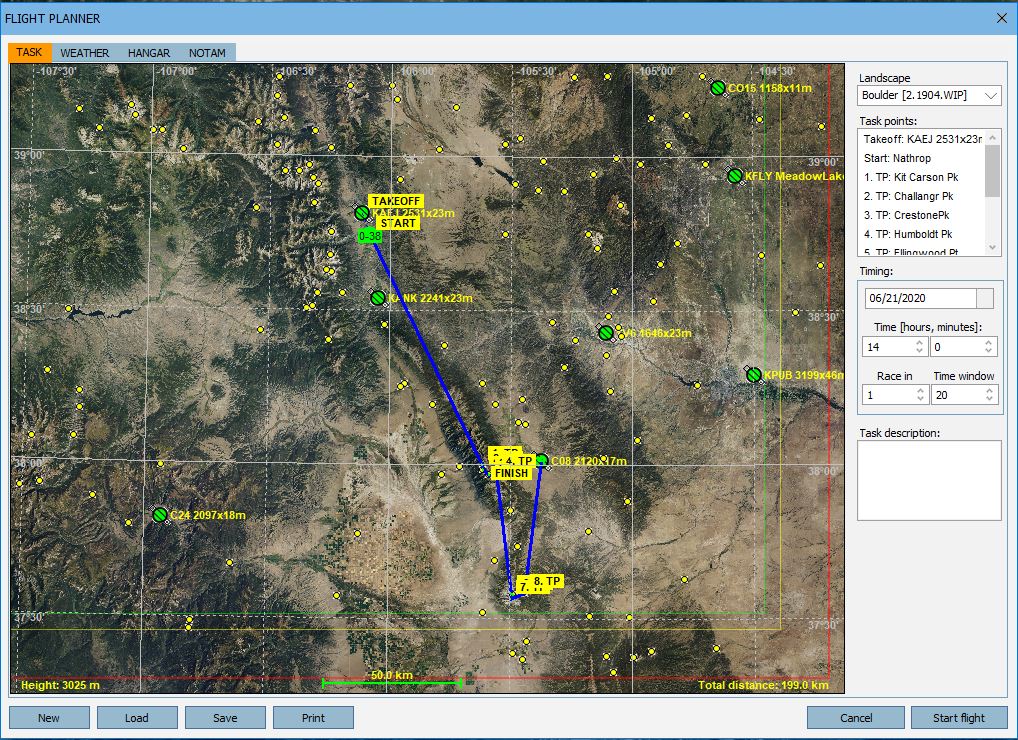 We will have WSW winds of about 14 kts, which means the wind will be perpendicular to the Sangre de Cristo range and should produce usable ridge lift on the western slope.  However, the ridge is not a straight line so you will have to pay attention to the direction of the individual ridge lines should you decide to fly in ridge lift.  It might be faster but is definitely more adventurous than staying high in thermals above the ridge.

The thermals will be very wide but may not be as strong as on our most recent flights.  There is moderate turbulence and the wind speed increases significantly at altitude which may make centering adjustments necessary to climb all the way to cloud base. To optimize your climb rates in thermals you may have to do some work.

Thermal activity will be high in the mountains and normal in the flats.  Try not to fall off the ridge as it may take you some time to work your way back up.  Streeting will be low.  There will be some indications of wave lift aloft and on the lee side of the Sangre de Cristos.  If you fly downwind of the mountains (probably not recommended) and run into lift or sink you’ll know why.

This should be another fun flight.  Good luck!