Here are the results for Flight 3 of the Virtual 14er Safari Cup, which took us along the Sangre de Cristo Range.

Here are some observations from looking at the various flight traces from different pilots:

Ridge tasks in Condor are usually won by those who are able to exploit the ridges the best.  This is especially the case if the ridge lift is strong and reliable and the thermals are weak. On our task this wasn’t quite true.  The thermals were definitely weaker than on our prior tasks but they were not “weak”.  Average climb rates of 5-6 kts are fairly good.  More importantly, however, the ridge lift was neither strong nor reliable.  A26 showed that most of the task could be flown in ridge lift but only by flying quite slowly even with a high performance glider.

I noticed the same thing on my flight, namely that the ridge wasn’t strong enough to support a high-speed flight and maintain altitude.  So my strategy was to follow the ridge where I could as much as possible but I was not willing to let my speed drop down to the point where the ridge alone could sustain my glider.  The result was a difficult compromise where I had do climb above the ridge (but not so high that the effect of the ridge would disappear), then fly fast along the ridge while losing altitude, and then finding a thermal early enough to climb back up without dropping out of the lift band.  I wasn’t sure whether it would work out and considered it a fairly high sporting risk, but it ultimately paid off.  You can see that my average cruising speed of 206 kph was substantially faster than A26’s 147 kph.  This plus a better average climb rate were ultimately the reasons for my higher point score.

The current overall standings after three flights are:

Flight 4 will take off (airborn) from Silver West Airport (where Flight 3 ended).  From there we will head straight to the north west, past Salida airport, into the southern Sawatch Range where we have eleven (!) 14ers to turn before we turn south again and land in Salida.

This is another excellent preparation for those who are planning to fly from Salida whether this summer or in future years.

The wind will be from 215 degrees (SW) at about 12-14 kts.  Wind direction and wind speed will be much more consistent and reliable than this past week and there will not be a significant wind speed increase at altitude and no wave activity.  This means that the same ridges that didn’t work well this past week should be far more reliable.

When you start to work the Sawatch Range, it will be imperative to always keep the wind direction in mind, especially if you can’t stay really high and get closer to the mountain tops.  The mountain range is wide and the geography can be confusing.  You must maintain situational awareness of where to expect lift and sink based on the wind direction and the orientation of the slopes and ridge lines. I expect that this might get tricky given how many mountains we have to turn.

That said, the thermals should be stronger and much easier to work than past week and this should make the task somewhat easier overall.  The only thing to keep in mind is that the thermal strength will be quite variable.  There may be some 15kt boomers but there may also be some thermals with only 5-6 kts of lift.  To be fast you will have to be selective which thermals to accept but you must also prioritize staying high enough so you won’t get in trouble in the high mountains.  This  should be interesting!  The turbulence will be light and the thermal activity should be high even in the flatter areas so there should be plenty of lift to make it around and I expect the best speeds to be fast. 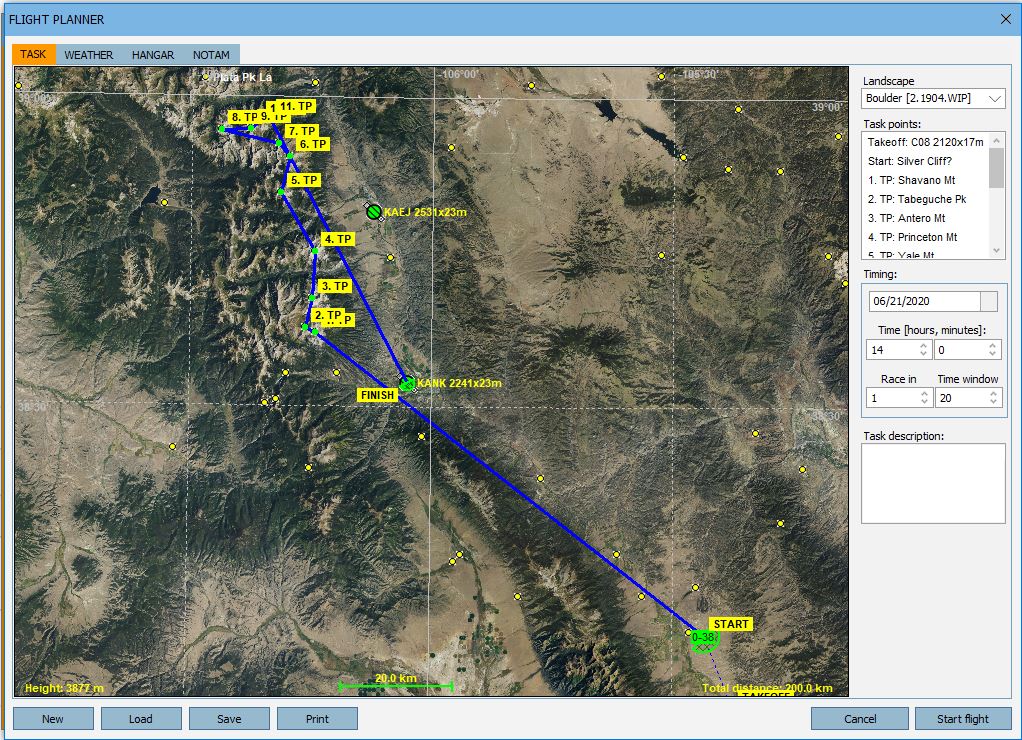 As always, I need your .igc files if you want your flights scored.

Have fun and good luck!