Our most recent SSB Condor Club Flight took us across the Continental Divide.  Once again we had 15 club members join the fun and 13 pilots successfully completed the task.   Seven finished without using thermal helpers or other miracles.  Well done!  The results are here. 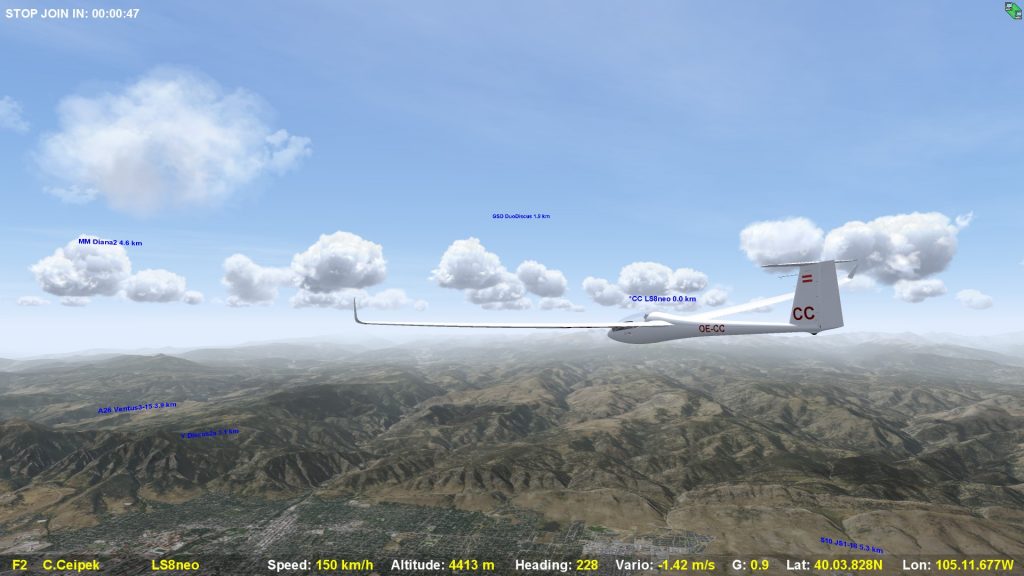 I noticed many pilots made big improvements since last week!

Scott Snyder had an outstanding (and miracle-free) flight completing the run from Boulder to Granby and back in a Duo Discus (i.e., no flaps) in less than 45 minutes.  His average speed was over 100 miles per hour (163 kph).  Despite starting ahead of the pack, and thus unable to use other gliders as thermal markers, he managed to score one of the best average climb rates of just over 10 kts.  (Obviously, the simulated weather conditions were exceptionally strong.  In real life, there will at best be a handful of days during the year when such speeds are possible.)

If you want to improve your cross-country speed, one way to do so is to look at your stats on the score sheet, compare them to those of others, and see where you have room for improvement.  Here’s a legend as to what they mean with some tips how you can improve.  All the tips are relevant for real life flying as well.

If you want to refly the task, you can download the flightplan here.

Next week, we’ll do something different.  Instead of flying a task as fast as possible, we’ll take a land-out tour to the south where we will try to land our gliders in various fields, model aircraft runways, and other strange places.  This will be a lot of fun and a great target landing practice.  Make sure you’ve practiced these exercises in advance!